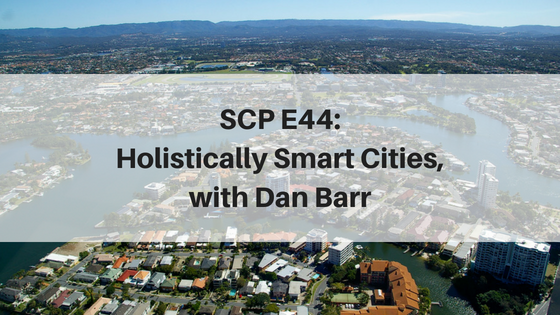 In this episode of the Smart City Podcast, I had a great conversation with Dan Barr. Dan is the director of the Better Cities Group and is passionate about making cities more liveable. Dan has a wide and varied background, and most recently embedded Smart City concepts into the Gold Coast Commonwealth Games. Dan and I also discovered that we’ll both be going to Japan in early July on the Future Leaders, Future Cities mission, which is super exciting. Dan also covers some of the emerging trends that he thinks are important but aren’t being talked about enough.

What we covered in this episode:

– Dan’s background in population health, development and environmental health, and public space project management
– How working on the urban planning of the Gold Coast 2018 Commonwealth Games sparked his interest in the Smart City space and led to starting his own consultancy
– Some of the ways the city of the Gold Coast was managed in real time, 24 hours per day, during the 2018 Commonwealth Games
– Dan’s definition of a Smart City
– Why the Smart City and Collaborate City concept is so important
– The opportunities and challenges facing Australia in the future
– Projects that Dan is currently working on
– Zoe and Dan’s hopes for their upcoming trip to Japan as part of the Future Leaders, Future Cities mission
– How Australia is embracing the Smart City concept as a whole
– How Dan believes we can better integrate across different disciplines, government, industries and academia
– The advance in VR and gaming technology for interactive communication of potential new infrastructure and developments

“I really got interested in how the way we design and build our cities, and how that affects population health and even individual health.”

“Recognising that cities are really complex ecosystems and making sure that we don’t look at it just from a land use or a transport or an economic perspective, but really holistically.”

“When we [the team working on planning the city for the Gold Coast Commonwealth Games] started to look at it, it became really clear that it wasn’t the technology that was holding us back, it was our inability to use the technology well.”

“We know that there’s plenty of challenges ahead for Australian cities, and I think obviously technology and data is one of the opportunities in front of us.”

“I don’t think it’s whether or not the Smart Cities concept is important, it’s just about how each city best gets on board and applies it for their own benefit.”

“I think that Australia is adopting [the Smart City concept] as fast as it has to at the moment. It’s human nature and potentially the Australia way to just carry on until we need to find a solution to a problem. Certainly I don’t think that we’ve been looking to optimise opportunity through the Smart Cities concept, but potentially that will change. The cities in Asia and Europe that have really advanced have done so out of necessity…”

“I suspect we’re 5-10 years away from Smart City thinking becoming integrated in our business-as-usual activity.”

“We’re so good at doing our business-as-usual and staying in our lane, that the integration of ideas within organisations is difficult, outside organisations even more difficult, and then across disciplines is just incredible. I think that that’s an incredible challenge.”

“As [the pilot studies] become more popular around the country and people can see the tangible benefits of these, I think it will become more of a mainstream conversation about how we use technology in cities for the benefit of communities and individuals.”