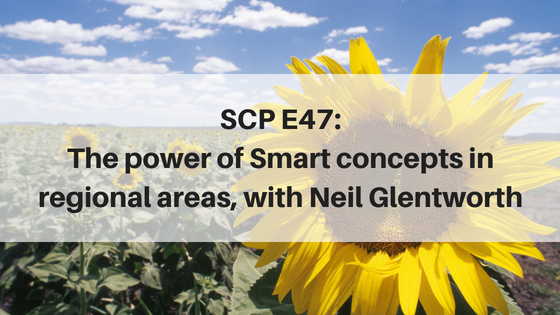 SCP E47: The power of Smart concepts in regional areas, with Neil Glentworth

In this episode of the Smart City Podcast, I had an awesome chat with Neil Glentworth. Neil is the Executive Chairman at GWI and he is passionate about the ethical use of data to make informed decisions. He is also passionate about Smart happening in the regions, which of course I love, so we had some great conversation about what the regions are doing in this space. As always, I hope you enjoy listening to this episode as much as I enjoyed making it.

“I’m interested in civic innovation, in communities taking control of their social and economic wellbeing.”

“There’s a real challenge in Australia that we have some very big handbrakes on the wider economy and there’s a lot of superficiality about it. There are some communities who are really committed, really forward thinking, but when the reality of so many jobs could face automation, there isn’t the economic density, we actually need to double down on the whole focus of how we reinvent our urban environments and our regional environments. I personally don’t believe we’re taking it as seriously as we could be, because the impacts are so great.”

“One of the mistakes that we can often make being city dwellers is discounting how advanced some of the regions are, and also woe the ‘poor regions’. Far from it…. They’re incredibly advanced, we just don’t hear a lot about it, which is a shame.”

“Just because you’ve got data doesn’t mean you should use it…We can use data for good, but we can also use it to cause a bit of harm as well, so the real emerging trend is people starting to deep think about the use of data.”

“At the heart of anything Smart, where we use data, is treating people as individuals, not as a group.”

“[On GDPR] Those businesses that have been acting ethically, no change. It is more making the customers aware that data basically is the customer’s own.”

“There is a very different level of community resilience in the regional areas where people just get on and make things happen…the tyranny of distance is gone through connectivity, and regardless of how good or bad the connectivity is, they’re making the most of it.”

“People are thinking different [sic] and are changing the game. There is not enough attention on what is going on in the regions. If they got even a fraction of the money that is going into the urban areas.”

Links mentioned in this episode:

Off the Track Training