In this episode of the Smart City Podcast, I had a really great conversation with Mateusz Jarosiewicz from Poland. He is the Program Coordinator for Smart Cities Polska. We talk about collaborating so we don’t have to reinvent the wheel, and he talks about how Smart City can be an ideology, a movement and a community. He also talks about making the Smart City concept more understandable for the greater audience, particularly starting in schools. Mat then shares some of the things he’s working on at the moment, including Road Maps and Vision for Poland, and Do Tanks rather than just thinking. He also talks about the importance of having visionaries and facilitators to integrate across the different disciplines, industries and government. The last thing we talk about is going from the internet to real places as an emerging trend. As always, I hope you enjoyed listening to this episode as much as I enjoyed making it.

“For me, it’s a very specific topic related to my deepest motivated about myself, about my city, my community…The Smart City concept is a very wide ideology and movement and community; a creative crowd of people who are transforming the cities all over the world.”

“I believe this [Smart City] idea can be some kind of accelerator for connecting those ideas and creating some frameworks [for] how we can transform our cities to be alive again…For me it’s like the new package, the new version of the operating system running the city.”

“Previously I believe guys from IT and ICT are kind of in the one bubble, doing things for Internet Explorer for Windows, and now they are converging with people who are planning the cities and who are doing social experiments, and it’s a completely new thing, what we have now. It’s great that the cities are something which is [the same everywhere in the world]. And this is one of the greatest inventions of our civilisation and anybody [can have] something to do with it, and by redesigning our cities we can ask how we redesign our societies in different ways.”

“I’m trying to make the [Smart City] concept more understandable for the whole society, starting from the schools. But from the other side I’m now developing myself as an expert and a leader of a group of people who are trying to put everything in place and create a road map and one vision for how we can do Smart Cities in Poland.”

“Perhaps we are the people who are meant to change it because it demands [a] very interdisciplinary and very cooperative approach to the silos and separate science ideas and branches of the business [world]. So I think the visionaries and people who can facilitate the process, put their vision right and communicate it to the society, to the government bodies [will be what creates integration].

“My idea was to create a new narrative for the cities. It was this operating system idea.”

“I believe for example the blockchain can be the thing which enables cooperation on shared data systems and asset managing platforms. It can be a big enabler for the Smart Cities.”

“What I see is that the people and especially the communities of interests and passions, are going from the internet to the real places in the cities. For example, we have booming coworking spaces across the world…so it’s getting more and more popular to connect with people [in real life].”

“I see the city as a platform for meetings and spending time together, not as a service and market thing. So that [idea of] going from the internet to real places is a big trend…I believe it’s also a trick to make [a] city Smarter by making people talk with each other more often. I think it’s the simplest solution.”

Connect with Mat on LinkedIn 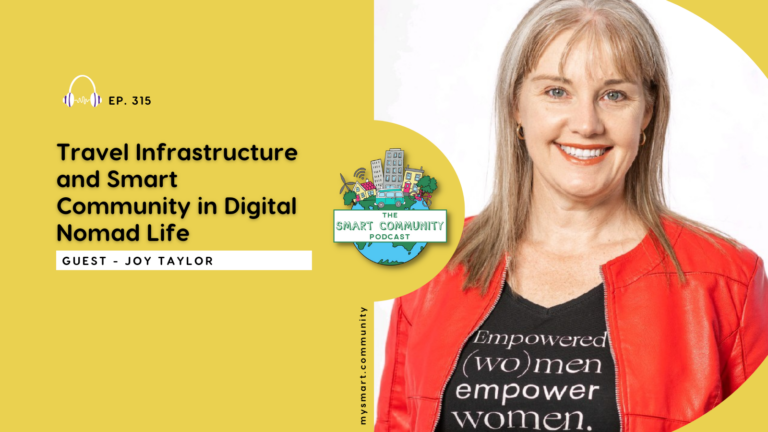 Hi #SmartCommunity friends! This is a bit of a bonus episode of the Smart Community podcast because we are catching up with a former guest but it’s a very different conversation than we usually have. So in this episode I have a brilliant chat with Joy Taylor, who you... SCP E314 Standardisation, Interoperability and the Importance of Context in Smart Communities, with Dr. Emran Amin

Hi #smartcommunity friends! In this episode of the Smart Community Podcast, I have a great conversation with Engineer and Smart Technologies advocate, Dr Emran Amin. Emran tells us about his background as an engineer and academic and his passion for contributing his... 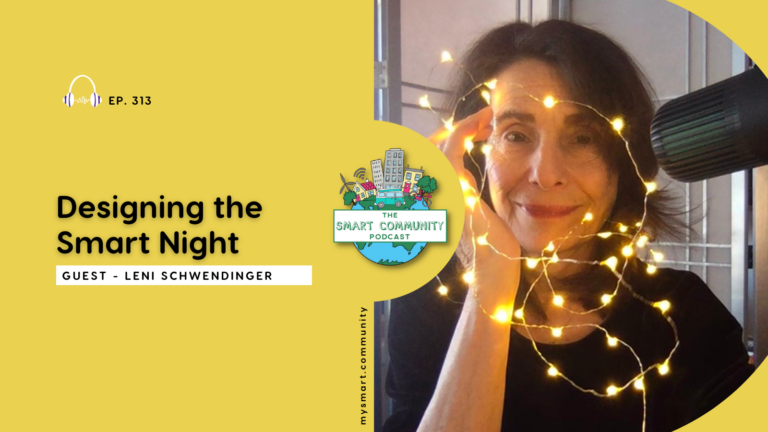 Hi #smartcommunity friends! In this episode of the Smart Community Podcast I have a wonderful conversation with Leni Schwendinger. Leni is a published, award-winning authority on the many issues of city lighting with more than 20 years of experience creating worldwide...