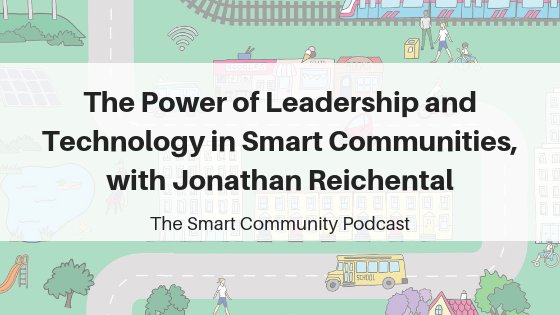 SCP E77 The Power of Leadership and Technology in Smart Communities, with Jonathan Reichental

In this episode of the Smart Community Podcast, I had a fascinating conversation with Jonathan Reichental, the Chief Information Officer for the City of Palo Alto, California. Jonathan shared a bit about his background in technology, why he loves the way technology can make positive things happen for individuals and the world. He talks about what it’s been like being, in his words, a bit of a maverick from the private sector, now being a public servant and working for local government.

Jonathan shares how the City of Palo Alto is working on digitisation and the high degree of importance they place on collaboration with the community. We talk about what a Smart City or Smart Community means to Jonathan, why it’s so important and how being in the opening chapters of the Fourth Industrial Revolution is creating a lot of change for all of us.

Jonathan also explains why cities or urban locations are the future, not only in terms of where most humans will live going forwards, but also in terms of solving the big problems facing our planet, such as climate change. We talk about some of the projects Palo Alto is currently working on and why decision making and leadership is key to better integrating across disciplines, industries, governments and academia.

We finish off discussing emerging trends, including the human trends of the digital divide and human rights, and tech trends such as blockchain, AI and data. As always, I hope you enjoy listening to this episode as much as I enjoyed making it!

Don’t forget to check out the Urban Motion Conference in Brisbane https://www.apchexpo.com

I think we should transform the analog ways in which City works—all this paperwork and inefficiency—and push as much as we can the capability to smartphones and online and get rid of all the filing cabinets and the abundance of paperwork we have at City Hall. Make things more efficient, more accurate, lower cost and create a better experience.

We have so many difficult problems to solve. They’re interesting problems. And we now recognise that technology is going to be the heart of solving those problems, so now we have a vendor space that’s beginning to step up and help solve some of those problems. This is the next stage of digitisation…the intersection of digitisation and hardware.

We’re in the opening chapters of a revolution, a fourth industrial revolution. The way in which the world enters this revolution will look completely different on the other side…Whatever it is, and there’s going to be more of it, we’re in a great big transformation and an individual and an organisation is not going to be able to sit this out.

[A Smart Community] is a response to some very big challenges, with technology at the centre…It’s not business as usual. We can’t respond in the way we did 20-30 years ago, it just doesn’t cut it, it’s going to be ineffective. We have to make bold decisions, big decisions, some major investments. We’ve got to do it regionally, nationally and now globally.

The future of everyone is in an urban context. We’re moving into cities now 2 million people per week. By the middle of the 21st Century 70 – 80% of all humans, of which there will be about 9 billion, will live in a city. Our future belongs to cities, so if we’re going to live in cities, which is looks like we are, we’re going to want clean air and water.

It’s cities that matter, so it’s Mayors that are going to be having the biggest impact on the climate crisis and the way in which their cities operate. Now we don’t live in a vacuum, we have to work with our state and federal colleagues, [but] the power to influence the future is now fully embedded in cities. That’s where GDP is created, that’s where the climate crisis will be fixed, that’s where we will solve and take care of air quality and water quality and energy.

For the everyday community member, [the term Smart] is less important to them [than results]. They just want to know that we’re using contemporary technology, we’re innovative in how we do things, we’re managing costs, and we’re prioritising effectively.

The first thing is to make the decision [to integrate, collaborate]. The leadership of the community has to say ‘we are going to embrace all voices and create channels and opportunities for those voices.’ It starts there.

We [in Palo Alto] still strongly believe in the city or town hall concept: in person, get people in a room, get people up on whiteboards and around tables, figuring out together how we solve problems.

I’m a guy who has spend 30 years in technology innovation and I’m even exhausted by the rate of change and the rate of new tech. I have the greatest empathy for those who don’t spend their days thinking about technology but are impacted by it.

Collectively we have to come to an understanding that things are happening now that have greater scope, bigger impact and faster velocity. Scope, impact and velocity are all going at rates that we’ve never seen in the history of humanity.

The future is here but it’s not evenly distributed, and that couldn’t be truer when it comes to our cities.

Cities still have to discover the value of data. The private sector has acknowledged that the data they collect in legal, ethical ways is beneficial to driving success of a business. Government has been a little slower…but can start to leverage that as a real asset in moving forward, solving problems and complementing decision making.