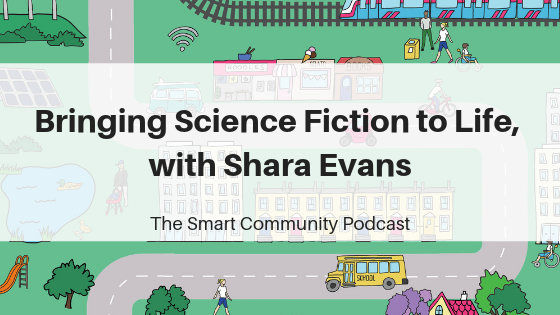 In this episode of the Smart Community Podcast, I had a fascinating conversation with Shara Evans, Technologist, Futurist, Keynote Speaker and Self-Proclaimed Sci-Fi Geek. Shara and I discuss her background, how she transitioned from technologist to futurist, and what sparked her interest in the Smart Community space. We have a really interesting chat about all kinds of futuristic technologies and some great examples of Smart concepts, including self-repairing cities using fleets of autonomous robots and drones.

Shara shares how this is already being implemented to various degrees today in a range of places around the world, and the future of this technology. We cover driverless cars, drones and hyper loops, and the opportunities and challenges these technologies pose to Australia, as well as how Shara sees Australia embracing Smart concepts. We also discuss the future of work and the new categories of jobs that we will see as our homes and cities become Smarter. We finish off talking about the emerging trend of security, privacy, ethics and the impact of virtual digital assistants, such as Google Home, Amazon Alexa and other similar devices.

A note on this episode: there are a few clicks and noises in the background in the second half of this episode, so please forgive us for those. As always, I hope you enjoy listening to this episode as much as I enjoyed making it.

You can now support the Smart Community Podcast via Patreon, at patreon.com/smartcommpod If you become a Patron, you’ll get a special episode each month exclusive to supporters. If you would like to feature on the podcast, you can also head to Patreon where you can sponsor an episode. There are options for a full featured episode or adding a promo for your company or an event coming up, with once off and monthly options available. Thanks so much for your support for the podcast. It is my dream for the podcast to be self-sustaining so it can continue to be produced no matter the circumstances.

“You might think of Smart Cities in terms of things like sensors or the Internet of Things, but then you also have to draw in to the picture robots, driverless cars, drones and next generation transport like Hyperloop, and all sorts of other things that make a city really Smart.”

“A Smart City is one that has deployed sensors and controllers in various ways that give them real time insights that they can take action on…but it goes well beyond [sensors], it goes to infrastructure maintenance, pedestrian traffic and building temperatures and using green energy, whether it be solar or wind, and getting ready for electric vehicles.”

“Part of the idea with a self-repairing city is that it will be like the white-blood cells in our body, and having a city that behaves almost like a living organism. These little tiny robots will basically wipe out the bad bacteria, the city defects, as they are detected.”

“I think using technology to make increasingly more crowded cities liveable, more efficient and more energy efficient is crucial to humanity because our population is growing. Demographers predict that we’ll have about 9.7 billion people on the planet but he year 2050…and by 2025 60% of the world’s population will live in cities.”

“Imagine being able to buy a nice house or apartment in a regional area but still being able to work in a big city [commuting via Hyperloop]. Such a game changer!”

“What many people are not aware of is that a lot of the vehicles that are commercially available today already have semi-autonomous features. Things like self-parking or cruise control assistance—that’s really a robot driving your car.”

“We’re going to see 3 dimensional vehicle to vehicle networks, highways in the skies, very shortly too. It will be behind the vehicle networks that are on the ground, because I think it will take a while for flying taxis and drone use to really become mainstream, but it’s bound to happen. Our skies are about to change!”

“There are a lot of jobs that are being enabled by technology…Automation, robots and artificial intelligence are going to impact just about every industry and just about every human on the planet. It’s going to happen but it doesn’t necessarily mean you’re going to be out of a job. But the boring, repetitive parts of your job may very well be automated and you’ll be spending your time doing the more interesting parts of your job.”

“What people do not realise is that once these [virtual digital assistants] devices are turned on, they are always on, they are always listening for their keywords, the companies behind these devices are recording everything in the background, in many cases transcribing it and in some cases reselling it too. It covers every aspect of your life and not just your personal life but your business life.”