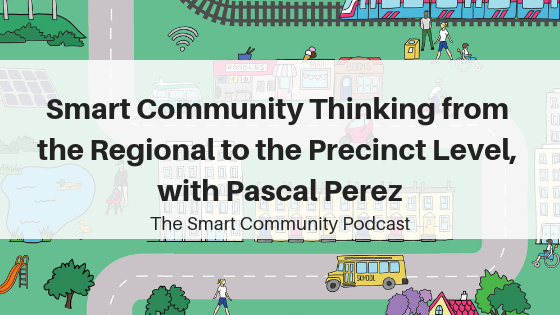 SCP E84 Smart Community Thinking from the Regional to the Precinct Level, with Pascal Perez

Happy New Year! Welcome back to the Smart Community Podcast for 2019. In the first episode for the new year I had a great conversation with Pascal Perez. But just before I tell you about that, I wanted to give a quick shout out to my first patrons! As you might know, I have started a Patreon page over at patreon.com/smartcommpod for fans of the podcast who want to support the show and get access to exclusive content. A big thank you to my first patrons for helping keep this show in your podcatchers week after week. If you’d like to support the show, head over to patreon.com/smartcommpod

Ok, on with the episode. Pascal Perez is the Director of the SMART Infrastructure Facility at the University of Wollongong. In this episode he tells us about his background in agricultural and environmental engineering around the world, and how he now applies that in the urban development/infrastructure space here in Australia. Pascal shares what sparked his interest in the Smart Community space and why we need to be thinking about Smart People as much as, if not more than, Smart Cities. We discuss the importance of needs-based/problem oriented technology solutions, why regional areas are currently doing this better than the big cities in Australia, and the difference between a revolution and an epidemic when it comes to technology. Pascal then shares about some projects he’s currently working on with the University of Wollongong and the SMART Infrastructure Facility, how he sees Australia embracing Smart Concepts, and the problems in the current immature landscape of Smart Cities in Australia, including lack of standardisation and a ‘jungle rule’ approach. We finish off discussing the emerging trends of the interoperability and security of sensors and IOT devices that make up our Smart Communities. As always, I hope you enjoy listening to this episode as much as I enjoyed making it.

“The word has been in use for nearly fifteen years now and there’s still no definition of a Smart City…It’s the fact that a Smart City should allow us, as individuals or as groups, to do better [with] what we are usually doing, to do new things we’re not aware of, or to enjoy more our life whether in the city or in the suburb.”

“Our group, here at the Smart Infrastructure Facility, really focuses on the fact that the Smart Cities have to be technology-enabled only, and if needed, if required. You can be a Smart City or Smart Town at a small scale without having to rely heavily on technology.”

“We try to improve the livability in cities, the health of the cities, but also the productivity of the cities. If new technologies can help to achieve better these goals knowing that the population increases, density in cities increases, it’s all good. But we always have to keep in mind why we’re developing these new layers of technologies in cities. If it is technology for the sake of technology, I’m sorry we’re not talking about a revolution here. A revolution starts and ends with people. When there’s only technology in the landscape, it’s called an epidemic, it’s not a revolution.”

“Should we be just dropping our arms and say ‘They’re doing it better than us and bigger than us’? No, because they’re gonna do that for themselves and not for us. So, we better find out our own solutions to our own problems, which means we need to grow our own RND and be a bit more ambitious, at the same time, hungry for expertise in teaching the young generation, as quickly as possible, the new tricks of the game.

“[There is a] necessity to go through a sandbox procurement process, so not buying things from the shelf and installing them as quickly as possible to become ‘Smart’, which I think is a dumb thing to do…but trying things, prototyping things, giving us the time and risk to prototype different technologies to see what would be the most appropriate for the problem at hand.”

“My frustration, at the moment, in the current landscape of Smart Cities in Australia, is the fact that the market is really immature. On one side, we have a government or governments at large who have been a bit reluctant stepping in and imposing standards….On the other side, [there is] a market where some of the competitors providing these technologies and solutions still think they can kill each other, and so, it’s really the law of the jungle out there…And in the middle we got potential clients like councils who scratch their heads who don’t really know what to do.”

“I think the danger of technological lock-in has never been as high as it is now in Australia. We shouldn’t be scared about it, we should be aware of it. And it’s up to us, collectively, industry, government, and academia and end users to have an educated discussion and communication about it.”

“We’re creating, on one side, a more productive and more efficient city and at the same time, we have to careful of whether the city is still resilient.”

Connect with Pascal via email: pascal@uw.edu.au