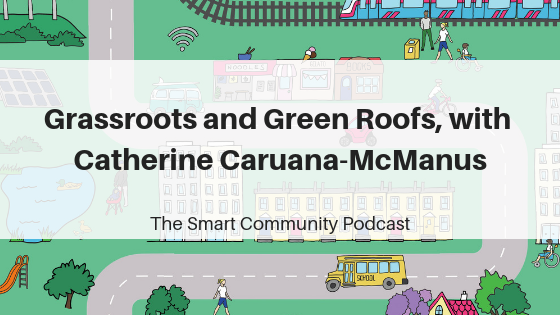 In this episode of the Smart Community Podcast I had a really fascinating conversation with Catherine Caruana-McManus. Catherine is the Director of Meshed IoT, an Australian-based IoT Integrator, and the founder of the global community Giant Ideas for Smart Cities, and the co-founder of the IoT Alliance. Catherine recently won an IoT Ambassador Award for Australia and Smart Cities Industry Leader at the recent Smart Cities Council Awards. Catherine has been in the cities business her whole career and even though it wasn’t called Smart Cities, she shares how she’s been working in the space for 25 years. We discuss the economic imperative for cities to get Smarter and more sustainable, as well as a bit about the history and evolution of Smart Cities as a concept over the last 30 years from it being purely about urban development, to now being acted upon at the grassroots level. Catherine has some really interesting observations about how Australia is currently embracing Smart Concepts, her optimism about Australia innovation, and the opportunities we should be acting on now. We then discuss some of the many projects Catherine is working on, as well as her takeaways from her trip to the Barcelona, Amsterdam and the UK. We finish our chat focusing on the emerging trend of the circular economy, and why we should all be talking about it more. One thing I will say is that we did record this at the end of last year so you’ll hear us refer to ‘next year’ in the interview, but of course that is now this year! You’re all Smart people, I’m sure you’ll figure it out! As always, I hope you enjoy listening to this episode as much as I enjoyed making it!

“Smart city to me is actually a mind-set. It’s actually not a physical thing. It’s a mindset of a society that actually wants to look at things to a different lens where they can collaborate across industries, research, and the government sector. And it’s also about a conversation. It starts with how could we actually do this better, and what is, therefore, the role of new systems and thinking and technology that can help solve for that?”

“I think cities that do well and that are Smart are those that really embrace the philosophy and the conversation about trying to do things differently and better.”

“I’m just so happy that smart cities is now part of the conversation with many councils across the country, because I think they see the benefits to it being much more grassroots movement as opposed to only being in the hands of the large players.”

“It’s important because we just can’t do what we’ve traditionally done. We’ve got pressures, particularly in Australia… there are some fundamental nuances which Australia is unique and therefore the conversation on smart cities is really important that we actually build up our own flavor of this revolution and this transformation.”

“Why it’s so important is that we want to make sure that those investments are considered investments and that we plan and embed the digital part as part of those overall infrastructure projects, so that we don’t have waste, so that we can actually deal with the fact that our cities are growing and we’re having to deal with things such as congestion, urban heat… Just look at the last couple of weeks in Sydney and in Melbourne with weather events: that’s why it’s important.”

“I do think that the Smart Cities movement is a clear opportunity for us to look at how do we prepare for Climate Change and how do also we look at things such as the Circular Economy, and do it in a really succinct and accessible way.”

“I think we’ve got the right ingredients [in Australia] and we’ve just got to continue to be open to the conversation and think strategically about how innovation, technology, new thinking and processes can actually help us move things forward and deal with the massive challenges [we’re] currently dealing with.”

“I think that Australia is ready for a rooftop revolution. You think about the space on rooftops: they’ve often got the best views but [only have industrial equipment there] but we could actually transform cities by having greening rooftops!”

“We still have this big challenge around data sharing. It’s not easy, even within large organisations, to share data amongst departments, so I think by making technology more accessible and particularly at the local government level where they are really at the cusp…and making it as accessible and affordable as possible, and then from that we’ll see where it will go in terms of linking with other things such as weather data.”

“[Collaboration] is about finding the right people and places. We have had no challenges in working with leading thinkers across government, universities and the private sector…it’s a matter of picking up the phone and having a conversation.”

“Australia is the most irradiated country on the planet. There is no other country on the earth that can achieve the outcomes of solar capability, we should be world leaders in this whole space around solar [energy].”

“I think we’ve got to get really focused around the circular economy and if we were to do that I think we could really transform our cities and certainly address some of the pain points we’re seeing [in Australia] today.”

“In order for us to engage around where future work and future opportunities are going to reside, We have to understand that there will be implications of things such as automatics and artificial intelligence and robotics, but it doesn’t have to be all doom and gloom. If we prepare our society to embrace the capabilities around new value added services in this new digital space, we will actually thrive…I do believe it’s definitely a transition but investment in the right places is really important now.”

People, companies and concepts mentioned in this episode:

Connect with Catherine on LinkedIn or with Giant Ideas for Smart Cities at https://www.facebook.com/smartcitiesIoT/