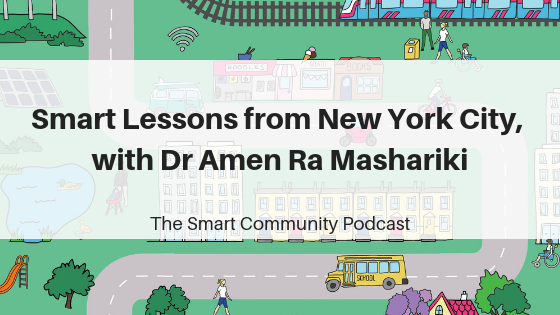 In this episode of the Smart Community Podcast, I had a really interesting conversation with Dr Amen Ra Mashariki, the head of Urban Analytics at global GIS company, Esri (pronounced Ez-ree). Amen has a really interesting background, ranging from computer science and being a software engineer at Motorola, to bioinformatics and Cancer Research Analytics, to being a Political Appointee in the Obama Administration and then the Chief Analytics Officer at the Mayors Office in New York City. He shares with us the personal story that sparked his interest in this Smart Community space and the key lessons he’s learned about developing Smart Communities over his career. We talk about what Urban Analytics is and why it’s so valuable in developing Smart thinking, and how Amen works with cities and operational officials in the areas of data science, analytics and location intelligence. Amen tells us about his visit to Australia to meet with some of those operational officials, as well as an interesting case study where data and analytics are being used to prevent housing discrimination in NYC. We discuss why Integrating for the sake of integrating almost never works and what to do instead, and the emerging trends of sensors, drones and blockchain being used in cities by cities. We finish our chat talking about the growing international trend of Civic Tech Engagement and Amen tells us how he sees the role of a Smart Resident in a Smart Community. As always I hope you enjoy listening to this episode as much as I enjoyed making it.

“A lot of us talk about planning for smart cities, but what I’ve learned is that Smart Cities are responsive cities. You can plan…but what you have to be prepared for are things that happen day to day, hour to hour, minute by minute in cities. Cities are such a tactical, fast-paced moving entity that any number of things can happen.”

“Every city has its own personality, its own level of complexity and its own complexion. What urban analytics says is, devoid of those differences, there are ways that you can think about being useful and being able to solve problems for a city, and these are the core ways that you use data and data science and location intelligence to solve those problems.”

“Smart City thinking is how do you think innovatively and thoughtfully around solving urban challenges? We have to now, we can’t rely on the same solutions that we’ve had, that we’ve relied on historically to provide a high quality of life for all of these people that are moving into these urban centres. So the opportunity here is that we have the space to think differently.”

“I mostly meet with officials who are in a space where they want to grow their ability to use data analytics to solve really complex problems in the city, and part of that growth is about how we think about data collaboration, sharing data and providing a platform and capability for data to be shared across the city. Because once you grow your data infrastructure, your ability to use analytics, data science and location intelligence grows exponentially.”

“Democracies provide pathways for citizens to engage with their government. Data, and particularly open data, makes those pathways far more salient and powerful.” That’s the role of government in terms of using open data as a mechanism for providing a tool for citizens to be more thoughtful, be Smarter, and be able to engage in a more impactful way.”

“This relationship between citizen and government is growing exponentially and data and analytics is the linchpin for that growth.”