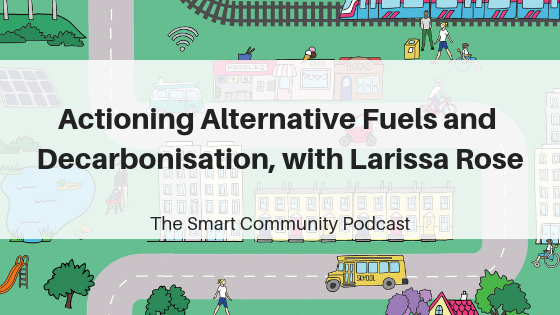 In this episode of the Smart Community Podcast, I had a brilliant conversation with Larissa Rose, the Managing Director for the Queensland Renewable Fuels Association. We discuss Larissa’s background as an environmental consultant, her Masters degree in renewable fuels and advanced biofuels, and how this sparked her interest in the Smart Community Space. Larissa tells us about the importance of future proofing a city, and how that relates to Smart City concepts, as well as what biofuels actually are, and some examples of different types of low carbon fuels. We talk about what’s happening in Australia regarding transitions to global regulatory pressure to reduce emissions, and the often overlooked health aspects of creating Smart Cities and Smart Communities. Larissa makes a point about air quality that might make you rethink your morning jog through the city streets.

We then explore how low carbon fuels, electric vehicles and hydrogen powered vehicles all fit together and specifically how they play their part in Australia. Larissa tells us about her trip to San Francisco for the Global Climate Action Summit, and how the QRFA foster collaboration from a global to domestic level. This includes their ‘paddock to parliament’ approach, which helps integrate across levels of government and different industries and disciplines. We finish our conversation discussing the emerging trend of fuel security in Australia, and the double benefit of progressive action on decarbonising the transport sector. This is a slightly longer episode than usual, but it’s a great conversation. As always I hope you enjoy listening to this episode as much as I enjoyed making it.

“[Cities] need to always, consistently, be applying innovation, looking at efficiencies and ensuring that sustainably is being managed. I think those are the key facets [of a Smart City].”

“Biofuels are first-generation fuels. Those fuels are alternatives to petroleum-based fuels. A familiar example is E10, a mixed-blended fuel. The biofuel [in it] is ethanol and is mixed with petroleum. When you see E10, that’s 10% ethanol (which is produced from an agricultural by-product) and is mixed with 90% blended petroleum. “

“Realistically, in Australia, we need all of those [fuels], whether electrification, hydrogen-based, mixed-blend fuel. They all play their own part based on a geographical location….We are not going to see full electric B-double trucks running across the Nullarbor, because they’re not going to be able to charge.”

“[At the Global Climate Action Summit] we were talking about how does it trigger and drive the local economies and cities to become smarter if there is a price on carbon? We don’t have one in Australia but in the US, they do. So, that has made a huge opportunity to the production and uptake of low-carbon fuels… [People are] incentivised for using them as well.”

“When you tell an everyday fuel consumer or passenger vehicle user, that they may only have 3 days of fuel if we were ever to get cut off of fuel in this country, that is a little bit of a reality in your face.”

“A lot of countries around the world have very significant fuel security policies put into place to ensure there’s large volumes of fuel kept in that country. Australia really needs to understand that we need to be doing that on a greater level. We are a very vulnerable country, very exposed… We rely on petroleum in all different ways, in so many different elements…we have the ability in Australia to produce quite a lot of clean renewable fuel and that would significantly displace the amount of petroleum that we would need to import.”

“The shifting change, I guess, that’s coming in to Australia that we’re seeing more and more now is Euro 6 spec vehicles that are coming in to our market.. these Euro 6 spec vehicles have greater vehicle  technology that can apply better fuel economy and that coupled on top of using biofuel blends, full replacement fuels, renewable fuels is going to be the game changer on how Australia can definitely capture CO2 reductions and reach some of its targets that it definitely needs to reach…”

“We are very accountable here in Australia to reaching some of those international targets that are being met. We’ve got a lot of work to do here in Australia. We can do a lot of that in transportation and obviously [transportation] is one of the biggest components to particulant matter and Co2 in this world…decarbonising the transport sector is on the forefront of everybody’s lips.

Progressive action on that is where we’ll see the change”