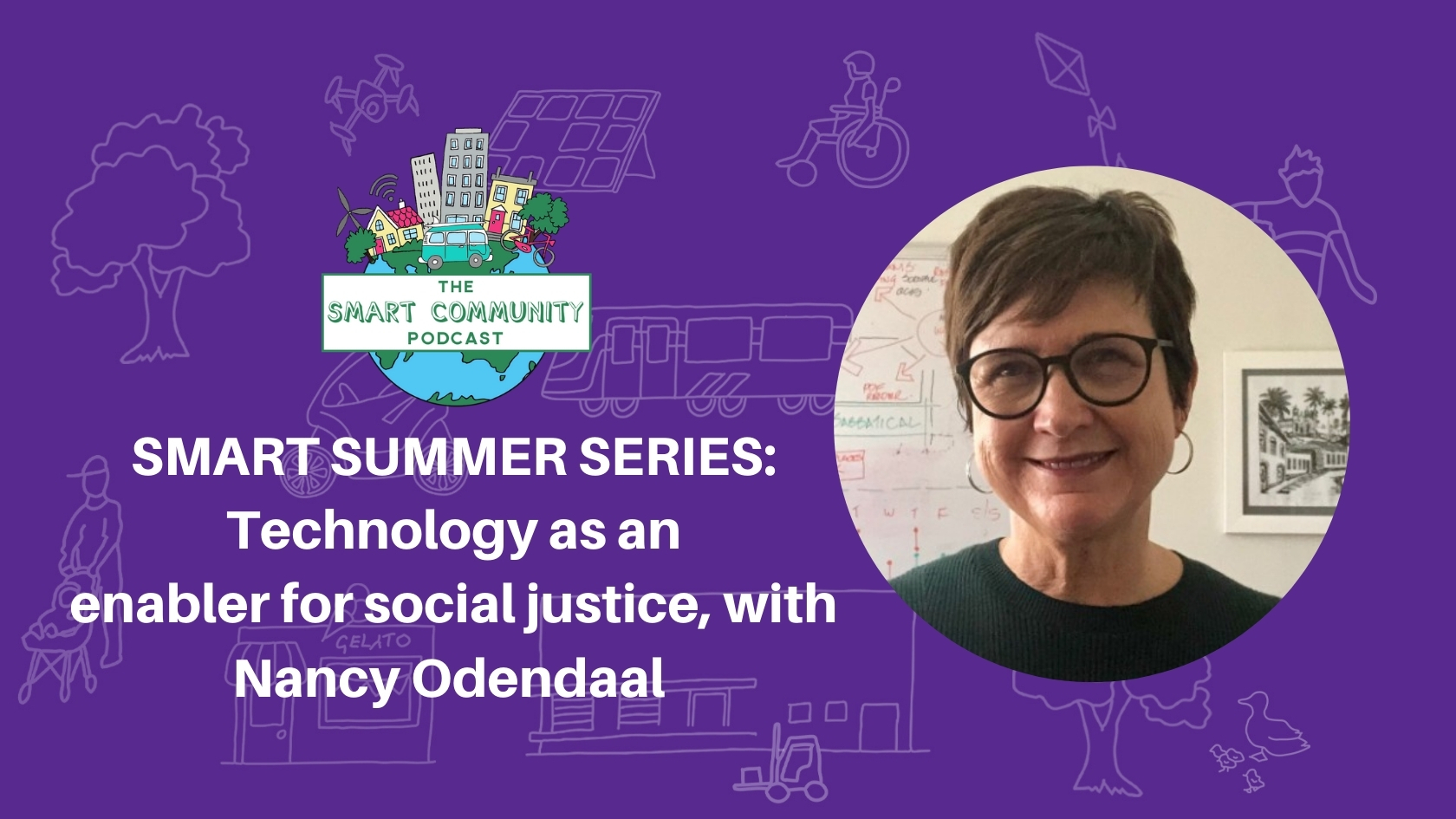 Hi #smartcommunity friends! Welcome to the Summer Series here on the Smart Community Podcast. We’re taking a little break from new content over The Australian summer holidays, but with more than 200 episodes in the bank, we’ve got plenty for you to catch up on. During this Summer Series, we’ll be sharing the replays of a few of our all time favourite episodes. And this week we’re starting right back in the beginning when we were still called The Smart City Podcast with Nancy Odendaal, who was on Episode 3! Nancy is an Urban Planner and an Associate Professor in City planning at the University of Cape Town, South Africa.

In this episode not only will you hear Nancy and I discuss the cool new idea of a podcast about Smart Cities, we also talk about her background in urban planning and how she’s been involved in the concept of Smart since the 1990s when it was called Digital City. We also discuss how informality is often core to understanding a city in the global South, the difference between Smart Urbanism and Smart Cities, and the contrast between big engineering approaches to Smart and the idea of Smart from the bottom up. Nancy and I also discuss the social justice angle of technology being used to challenge the status quo, and how tech is a part of the day-to-day even for people who live quite marginal existences. Plus, Nancy tells us why she believes South Africa is the perfect place to pilot Smart tech, and so much more.

Of course, this episode is now almost 3 years old so I have an update from Nancy: she’s got lots happening, including her new book Shaping Smart for Better Cities, with another book on the way! We’ll be sure to get her back on the show in the future for a full update. But in the meantime, we hope you enjoy listening to this episode as much as we enjoyed making it!

“There were essentially three kind of approaches that I found. One was this kind of technologically determinist idea [that] technology is going to save us all. You know, if you were writing from the Global South perspective, which I always have done, technology is a great saviour, this great panacea, that will solve all sorts of socio economic ills. And that kind of technologically determinist perspective, you know, was something that I always took issue with. I always embrace the second perspective, which is more that technology and human agency kind of coexist, and they inform each other. So that, to me, is a far more interesting way of looking at it. And then, of course, there’s the kind of futuristic stuff, the kind of science fiction type stuff.”

“I carved out a niche for myself, where I was interested in actual cities, and the shape of cities and spaces in cities and how that interfaced with technologies. Where that took me to essentially was to think about informality a little bit more carefully, because so many cities in the Global South…there’s so much variation, but informality is quite core to understanding the city in [places] where a lot of livelihoods are enabled through the informal economy or people live in informal settlements. And to me, I thought there was such an interesting interrogation to be had around technology and informality.”

“You’re starting to see these sort of fantastical master plans for Smart Cities in places like Nairobi, and Lagos and Rwanda, Kigali, which is something I tend to be quite critical of, because it bears such little resemblance to what the cities are actually like, and what really goes on there.”

“South Africa has the basic infrastructure that is very good. It has the technical expertise, it’s got good universities, it’s got a very strong engineering profession, very strong IT profession. And yet, other parts of Africa [have] better broadband connectivity than we do. And the reason for that is, our telecommunication sector has been very slow to reform itself.”

“I think [South Africa] is the perfect place to pilot new ideas. And the reason I say that is because there is good capacity. There’s good skills. There are good universities…there’s a knowledge infrastructure that would enable innovation. And at the same time, there’s an interesting social economic spectrum with regards to income, that would enable ideas to be sort of tested across various socio economic groups.”

“My experience has always been a shared vision. If we can negotiate a shared vision, if we all want the same thing from this Smart City, if we agree on what we want from it, we can probably work towards it. I don’t think we’ll always agree but if we can at least agree on a shared vision it will help a lot.”

Connect with Nancy via her Academic webpage at http://uct.academia.edu/NancyOdendaal 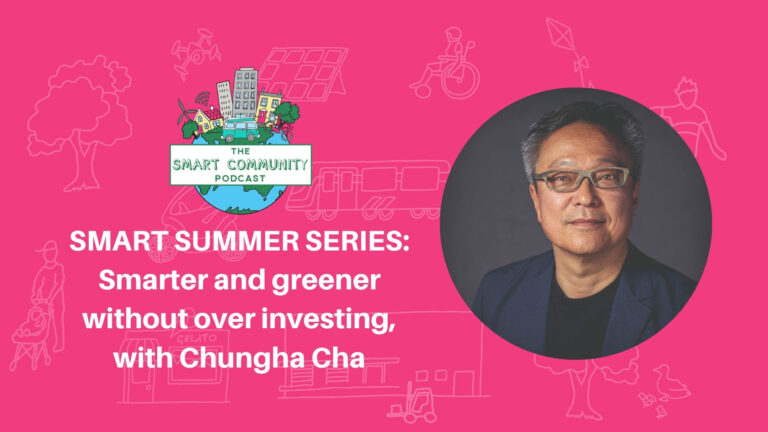 SCP E208 Summer Series: Smarter and greener without over investing, with Chungha Cha

Hi #smartcommunity friends! Welcome back to the Summer Series here on the Smart Community Podcast. As you know, we’re taking a little break from new content over the Australian summer holidays, and instead we are sharing the replays of a few of your all time favourite... 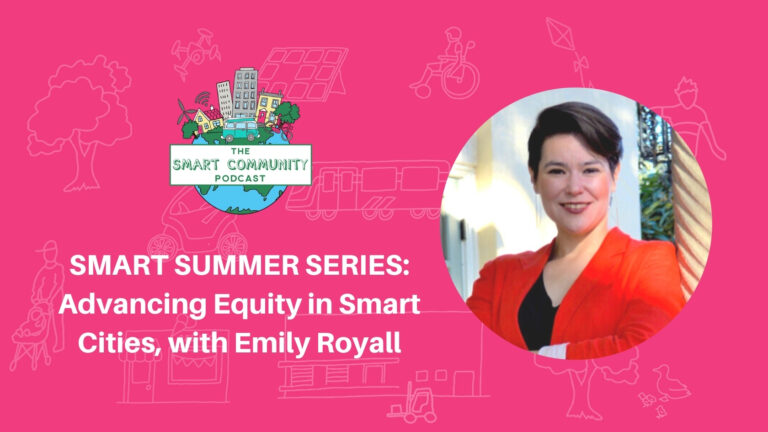 Hi #smartcommunity friends! Welcome back to the Summer Series here on the Smart Community Podcast. As you know, we’re taking a little break from new content over the Australian summer holidays, and instead we are sharing the replays of a few of your all time favourite... 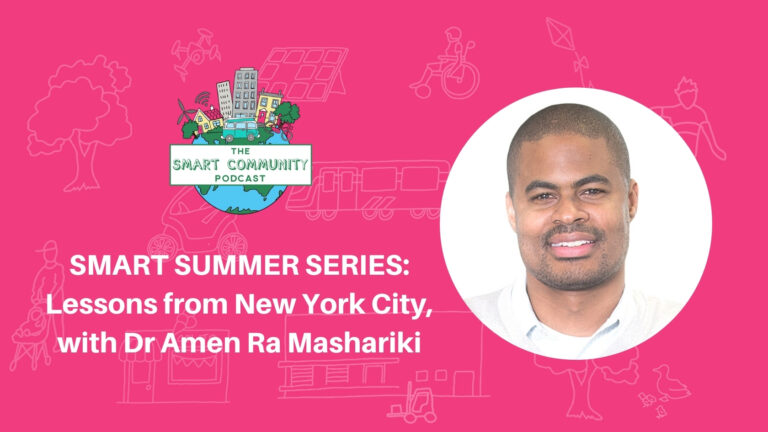 Hi #smartcommunity friends! Welcome to 2021, can you believe it? And welcome back to the Summer Series here on the Smart Community Podcast. As you know, we’re taking a little break from new content over the Australian summer holidays, and instead we are sharing the...