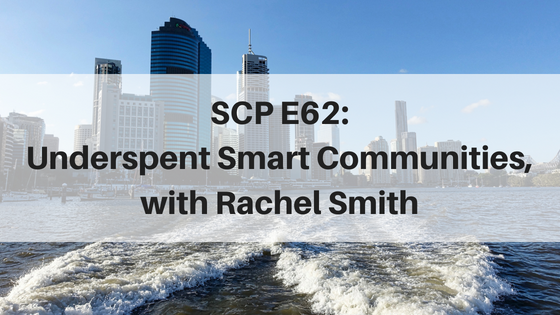 In this episode of the Smart City Podcast I had a fantastic conversation with Rachel Smith, the author of Decongestion and also Underspent.  A transport planner by trade, Rachel tells us about the BMW Guggenheim Lab she participated in where she travelled the world with the theme ‘cities of the future.’ We talk about the idea of underspent cities and how Smart Cities is about the intentional use of resources. We discuss the sharing economy and Rachel’s experience of this overseas. She then shares the importance of people in the Smart City and the drivers of behavioural change. We finish on the emerging trend that people aren’t talking about enough, which is the changes in retail that are already happening. As always, I hope you enjoy listening to this episode as much as I enjoyed making it.

“[Smart Cities are] really, really important because we’re not going to have the money or the resources that we have now into the future…we don’t know what’s going to happen in the future…The Smart City means we can do what we are doing now but we’ll do it in a more effective way, using and managing our resources more effectively and with intent.”

“I think if you stopped the average person in the street and asked what a Smart City is, I don’t think they would know. So I think there’s a real piece about what is a Smart City and explaining it. There’s some really cool stuff happening and there’s some really simple stuff that people need to understand, like how they may be Smart street lighting…

We’re carrying around an amazing resource in our hips or handbags all the times, and wouldn’t it be good if we were using that using it for good I guess.

“[It’s about] connecting the resources that we’ve got, and then using the facilities or the infrastructure more effectively, and as a result, saving money for the public sector and individuals as well.”

“Imagine going into a restaurant or cafe in Brisbane or Sydney or Melbourne and asking to borrow their stuff. People just wouldn’t do it, because it’s just not the cultural norm here.”

“When you go there [Mumbai] you really see how people value the resources that they’ve got. And no-one wastes anything — they can’t afford to!”

“It’s about really going out and having conversations with people and listening. It’s easy to make assumptions…it’s really about really understanding the kind of drivers that encourage and enable people to change their behaviour and really listening to what people want.”