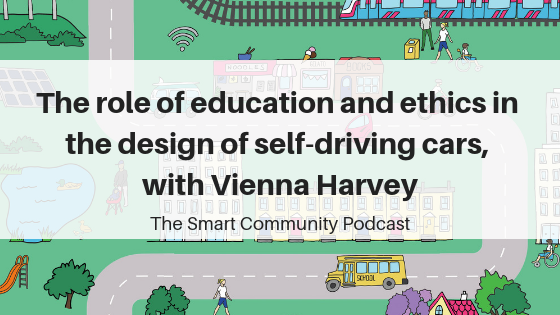 SCP E103 The role of education and ethics in the design of self-driving cars, with Vienna Harvey

In this episode of the Smart Community Podcast, Zoe brings you an interview she did on location in Silicon Valley as part of her Churchill Fellowship trip investigating Smart Mobility around the world. By the way, if you want to hear more from Zoe about her trip, you should subscribe to her exclusive podcast about her Churchill Fellowship. It’s exclusively for her supporters on Pozible, so head to Pozible.com today, search for My Smart Community, and hit support. There’s several episodes there already for you to get stuck into and hear Zoe’s insights from the various people, places and platforms she’s been exploring as part of her Churchill Fellowship.

In this episode, Zoe speaks with Vienna Harvey from online learning company, Udacity. Vienna is a Learning Technologist that specialises in the Self-Driving Car nano-degrees at Udacity. She also did a thesis project about the role of ethics in the design of self-driving cars, and she shares some really interesting findings from her research in this area. Zoe and Vienna also discuss the talent-gap in the autonomous vehicle industry and how Udacity’s nano-degrees are one way to combat this, as well as the emerging trend of actually seeing self-driving cars on the road in more places. There are a couple of tech glitches in this episode. It’s very listenable, however you will notice a few spots where Vienna’s words get slightly clipped, or the speed changes slightly. As always we hope you enjoy listening to this episode as much as we enjoyed making it.

“How can we not only create the vehicles to be as technically sound and good as they can be, but also how can we ensure the people who will be using and buying them someday will be comfortable with this technology and feel good about it?”

“I think [self-driving cars] are going to be a really important part of broader Smart Communities in the future.”

“A big part of my job as a learning technologist is to test code that students have written and submitted as their capstone project for Self-Driving Car Engineer. We have a self-driving car at the office and students taking that nano-degree program are able to write code that then drives an actual self-driving car around the parking lot. I’m the person who is the backup driver and safety check for when we’re doing that.”

“Increasing accessibility for more people is going to be a huge part of transportation in the future…[Self-driving cars] would be able to give more people access to that kind of mobility that they might not otherwise have. E.g. someone who is too young or too old to drive a regular car could maybe get that increased mobility through a self-driving car.”

“Flying cars [are] definitely exciting and cool to talk about but I think it is pretty far on the horizon, at least as something relatively mainstream. I think it will remain a little more niche for the time being.”

“In general people were very consistent, with a strong leaning towards wanting to prioritise the safety of the person in the car, which I think does make sense from a consumer standpoint, because you’re not going to want to buy a car that you worry might sacrifice your life.”

“There’s a really big talent-gap in the [autonomous vehicle] industry right now, where people are looking for candidates who can fill that gap and who come in already with those skills and specialised knowledge.”

“We are starting to get self-driving cars on the roads. I think the next thing is going to be expanding where they are, because right now the majority of them are still fairly localised in Silicon Valley and the few other places that are known for working with these. So I think it will be interesting to see the continued expansion.”